This article demonstrates how to create a sandbox for SQL on CSV processor in your local environment:

When do you need it

When you are creating a configuration for SQL on CSV processor and writing a relatively long query can be inconvenient. This is because the query field does not show the whole code and it is needed to run configuration to test a query each time.

In this case, it is possible to recreate the SQL on CSV processor environment locally and use it as a sandbox.

This allows you to write queries locally, run and debug them without access to Meiro Integrations.

Whenever ready, you will just need to copy-paste your code into the SQL on CSV processor configuration.

TextQL and how to install it

At the backend, SQL on CSV processor uses TextQL (allows to execute SQL queries against structured text like CSV).

Use Homebrew and run the command brew install textql in a command-line interface.

Build it from source using Golang (you’ll need to install it first): run command go get -u github.com/dinedal/textql/….

Otherwise, use windows subsystem with ubuntu and brew your textql installation!

Download the data from the bucket Data Out and save to a folder on your device. 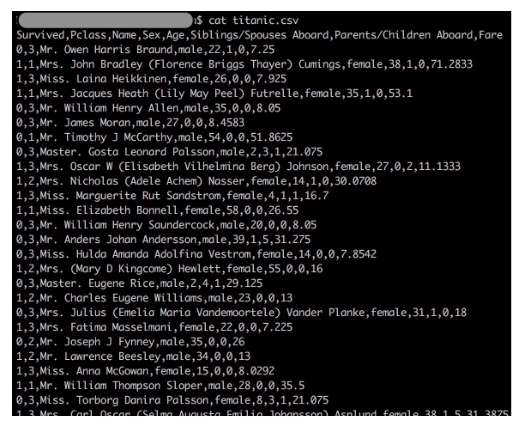 Write and run the query in the command-line interface.

Using TextQL, you can write a SQL query in the command-line interface:

Be aware that the name of the table in the query should be written without extension: titanic (not titanic.csv). 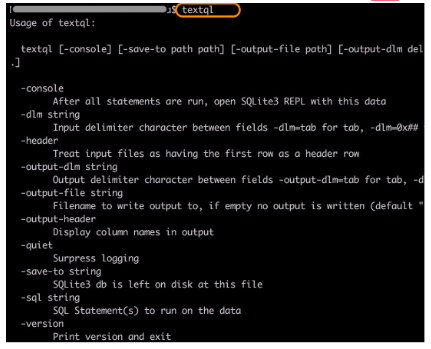 Write and save the query in the file

Writing and running queries in the command-line are convenient only in the case of short and simple queries.

For more complex queries is recommended to write a query in a separate file, run it and then test it in a command-line environment.

To run the query as a bash script, the file should be with .sh extension and should start with #!/bin/sh. For writing the query you can use any code editor you like.

After saving the file in the same directory as your table (to simplify), run in the command-line interface bash scriptname.sh. The result will be shown as standard output or saved in the file depending on your script.

Below we are giving you a few examples of working with textql based on the Titanic dataset. To use them, download the dataset to your working directory.

The simple query counts the number of rows in the table with standard output.

1. Paste the following code into a file in the code editor:

2. Save as query.sh at the same folder as the dataset (to simplify).

3 Run bash query.sh in the command-line.

How to save the results of the query to the file.

1. Paste the following code into a file in the code editor:

The argument -output-file from the code above allows you to save the results of the query in the file.

2. Save this code in a file as query.sh at the same folder as the dataset (to simplify).

3. Run bash query.sh in command-line. There will be nothing in standard output as the results were saved in  the table output.csv.

After writing and running the query, you simply need to copy-paste the SQL query to your SQL on CSV configuration and run the configuration.

Previous
Tutorial: how to configure Power BI to connec...
Next
Best Practices