The R from Git repository processor allows you to run an R code located in a Git repository. Meiro Integrations clones the Git repository into the /data/repository folder and runs the code in the configuration. The code repository is a file archive and a web hosting platform where a source of code for software, web pages, and other projects are kept publicly or privately.

Git is a version control system for tracking changes in a project, or in a set of files to collaborate effectively with a developer team or to manage a project. It stores all the information about the project in a special data structure called a Git repository.

This is a Git directory located in your project directory.

R is a programming language and free software environment for statistical computing and graphics. The R language is widely used among statisticians and data miners for developing statistical software and data analysis.

To set up a configuration for an R from Git repository component, you need an account in any version-control platform that supports Git with a created repository containing R script in it. More details in the Structure of the project section below.

Lean more: code repositories you can find in the article.

To work with R from Git repository component comfortably, you need to be familiar with:

Topics in R you need to be familiar with include (but are not limited to):

We recommend you begin with the official tutorial if you are not familiar with R syntax but have experience in programming in other languages. If you are a complete novice in programming, we suggest you check the tutorials for beginners.

Data In/ Data Out 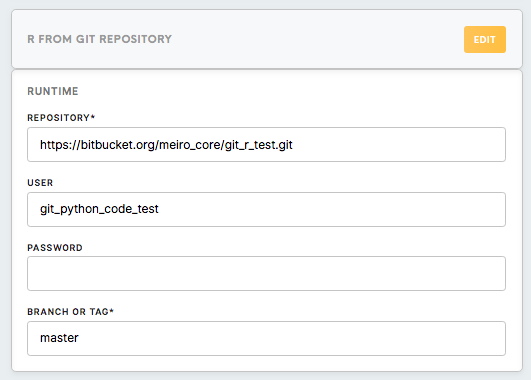 Parameters are the property in config.json file, which allows you to keep the necessary values and to make them accessible from the script. It is supposed to be in the JSON format and represents a collection of property-value pairs. Parameters are accessible via property “parameters”.

Parameters can be useful in different cases, such as:

You can use parameters to keep whatever values you want to make it easily accessible and changeable through the Meiro Integrations platform. It is shown in the example section below.

To connect main.R (in your Git platform) to the Parameters, you need to:

For example, let’s say we want to connect main.R to “Username” from Parameters in Meiro  Integrations. Therefore we will use RJSONIO package (which allows working with the JSON code) and will write in main.R script:

In Parameters we will specify the value for “Username” and write:

Learn more: How to search & replace within a code editor

Requirements to the script

Structure of the project

The file in the repository with the code you want to run should have the name main.R (capital letter R).

If there is no such file in the repository (for example if the file will be named main.r), Meiro  Integrations will return an error in the activity log.

In case of problems with the renaming of the file, you can find useful tips under the link.

If your code in the Git repository is too long, consider organizing and splitting your R code. We advise you to think through the structure of the project as it should be fully accessible through “main.R” script file.

To organize your code, you can use the command source(“source_path”)

Learn more: about source command you can find in the official R documentation.

R from Git repository processor comes pre-installed with the most common packages, listed in the features section above. However, if you need additional packages it is possible to install them. Meiro Integrations uses Cran , Biocoductor or Github to install packages.

If you wish to use other packages than the preinstalled ones, first you need to know the package you would like to use. Have a look at the Cran , Biocoductor or Github and find packages you are interested in.

Install package you are interested in with the command in your scriptinstall.packages(“name of the package")

If you do not specify the latest version of the package in your command, the newest version will be downloaded.

If you wish to specify the version you need to use the command install_version("name_of_the_package", version = "number_of_the_version")

For example, if you wish to install package “ggplot version 0.1.1”, your code will look like

Remember: Use absolute paths when you need to access data files in your script.

You need to use the absolute path, otherwise, the script from Git will not be able to find the files in data in, and Meiro  Integrations will return an error.

The analog console log in Meiro Integrations is the activity log, where you can see the result of running your script including errors and exceptions.

This example illustrates a simple code that imports an open dataset from an external source, writes it to an output file and prints a standard output to the console log. Usually, you will need to open the file from the input bucket, which was downloaded using Connector, but in some cases requesting the data from external resources can be necessary. Also, this example demonstrates how the parameters feature can be applied.

In this example, the URL of the dataset and its path and name are saved in the parameters property of the file config.json. All these values can easily be changed without changing the script in the repository.

The example is the same as the previous example but includes added Meiro  Integrations Json Parameters. In this example we are importing an open dataset from an external source (URL), writes it to an output file and prints a standard output to the console log)from the URL address. The only difference is that we wish to store URL address in Parameters in Meiro  Integrations, so we can easily change URL without the need of adjusting script in Git repository.

This example illustrates opening, filtering and writing CSV file. In this script, we will use Titanic dataset which contains data of about  887 of the real Titanic passengers. This dataset is open and very common in data analytics and data science courses. Let’s imagine we need to analyze the data of male and all passengers separately and want to write the data input 2 separate files.  Data in this example was previously downloaded using the Connector component. We used HTTP connector to load data from the following URL address http://web.stanford.edu/class/archive/cs/cs109/cs109.1166/stuff/titanic.csv.

If you want to reproduce running the code on your computer for testing and debugging, or you want to write the script in a local IDE and copy-paste it in Meiro  Integrations configuration, the easiest way to do this would be to reproduce the folder structure as below:

Input files and tables should be located in the folder in/ in the corresponding subfolders, output files, and tables in out/files and out/tables respectively.

For reproducing the example 3, you will need to download the dataset and save it to the folder /data/in/tables as titanic.csv, paste the code from the example to the script file in the repository folder and run it.

New files will be written to the folder /data/out/tables/.

We draw your attention to the fact that in all the examples, absolute paths are used because of the specifics of R from Git repository processor.